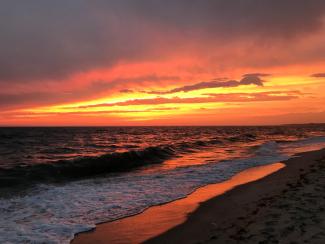 I recently returned from a week’s vacation in Truro.  My wife and her family have been vacationing there for 3 generations and about 60 years, but I had never been until a few years ago after I met her.  She loves it there so much that we chose to get married there last year – a small, immediate family only ceremony at Great Hollow Beach.

Truro is the second to last town on the Cape, just before Provincetown, and it can take over an hour to get there once you cross one of the bridges.  But that remoteness is also a blessing, as the area is relatively less populated (at least compared to the Upper Cape).  It’s very serene and peaceful, quiet and relaxed.

We rented a small cottage that was originally owned by a descendant of the Wright brothers.  The street is even called Kill Devil Road, after the location of that famous first flight.  There were originally four structures on the land, but over the years two have been lost to erosion.  Each year it’s a bit anxious to see what damage winter has done and if the remaining two cottages are any closer to the edge of the sand dunes.

We didn’t do too much, and that was exactly the point.  I spent time relaxing on the beach, eating plenty of seafood, walking the local trails and beach, and reading (“Alexander Hamilton” by Ron Chernow, the book that inspired the Broadway musical).  The days weren’t too hot, the sunsets over the water were beautiful, and the sound of gently rolling waves was a perfect soundtrack for falling asleep.

It’s always nice to get away and relax.  After another year spent working from home much of the time, it was also nice to just be out of the house for so long.  It’s going to be a busy summer for Cape Cod and with rentals difficult to come by, I feel very lucky to have had a wonderful week there.  I wish all of you a summer that is just as enjoyable – after the last 18 months, I think we could all use that!