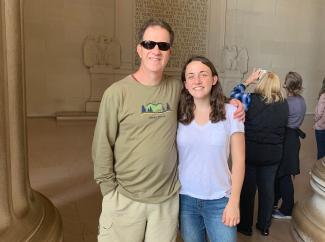 It was amazing how quickly seven months went by from dropping our daughter Molly off freshmen year to her being back home due to the pandemic.  Seeing a happy young adult transition to very unhappy camper back under our roof, it really struck my how ready they are to be on their own.  So while I can embrace the mindset that the kids will be okay, I’m still not comfortable with the Molly and Pete perceiving my IQ to be that of a chia pet.

Fast forward nine months to Molly’s second semester of sophomore year; the college campus is still closed and classes are remote.  Fortunately, she and a few friends found an Airbnb close to school in Washington DC to rent for a couple months.  So in early February she and I drove to DC with her clothes, school supplies and a few creature comforts.  The seven hour drive went by quickly; talking about the semester, some clubs Molly wanted to join, and catching up in general.  I was reveling in the mythical adult conversation I was having with my kid that I heard so much about, but was skeptical it would ever happen.

One of the topics of conversation was a club Molly wanted to join where the students help non-profit organizations.  It was very competitive to join with multiple rounds of interviews, but a friend was in the club and really enjoyed it.  Realizing I was about to provide fatherly advice that was not necessarily wanted, I delicately suggested ways she could ask her friend for some advice about the interview process.  Molly did reach out to her friend and later commented that the conversation was very helpful.  Fortunately I was not driving at the time because I probably would have gone into a ditch.

The whole conversation made me think of a great Mark Twain quote, “When I was a boy of 14, my father was so ignorant I could hardly stand to have the old man around. But when I got to be 21, I was astonished at how much the old man had learned in seven years.”

So I’m now smarter than a chia pet and rapidly gaining on the family dog.  My only question for Mr. Twain is whether I’ll peak when Molly is 21.