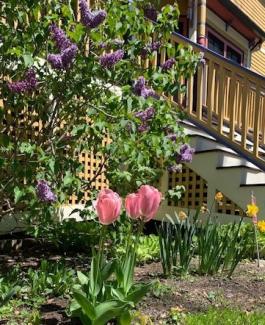 I realize I’m setting the bar low here in terms of competition, but having teenage kids can do a number on one’s self-confidence so I’ll take the ‘win’ whenever I can.  What I know about plants, flowers and gardening in general could sit on the head of a pin with room left over for a rose bud or two.  However, my wife Martha loooooves to garden and has quite the green thumb.  She has a master plan for the yard so there is always something in bloom from May through September.

However, her one nemesis is the local rabbit population eating her tulips and daffodils before they even have a chance to bloom.  While Martha was away for the day early in April I decided to take the battle to the uninvited wildlife.  Lacking landscaping acumen in addition to having no green thumb, I bought some short fencing the local garden shop referred to as ‘critter’ wire.  Fortunately we had a neighborhood gathering the weekend before and I was explaining to a friend my grand plan.  He mentioned there were some sprays you could also apply to keep the rabbits at bay, with the only downside being a potentially strong odor after application.   I found something called “Liquid Fence – Deer & Rabbit Repellent” at the garden center so I tossed that in the shopping cart as well.  Thus avoiding the house project dictum that any domestic undertaking requires at least three trips to the hardware store.

The next day, proud of my purchases, I laid out the fencing and posts, ready to win the war of the tulips (sorry for the very bad pun).   Martha saw me laying out the hardware, asked a couple of questions about how this would work, and then scrunched her nose the way a three-year old looks at broccoli.  Plan ‘A’ nixed I showed her the spray.  More aesthetically pleasing than fencing and the smell was hardly noticeable, so we gave it a try.  An hour later the spray had been applied and we just had to wait and see if it worked.  Fast forward a month and I’m happy to report we have yellow, white and pink flowers sprouting throughout the yard.  Next time I may let you know about the time I faced off against a chipmunk.